One hundred and ten teens attended the Juvenile Justice Public Forum held last week Friday at the San Pedro Lions Den for the opportunity to speak their mind and be heard by officials from the Ministry of Human Development’s Community Rehabilitation Department and the Ambergris Caye Safety Committee. Teens presented their views on issues such as crime, violence, and recreational opportunities available (or not) for them in San Pedro.

Prior to the youth meeting on Friday, a meeting was held on Thursday to get feedback from parents, but unfortunately, it was poorly attended. Nevertheless, officials from the Community Rehabilitation Department and the safety committee sat down with Mayoress Elsa Paz and the small group in attendance to hear their concerns and get their suggestions for the provision of a healthier environment for the teens on the island.

Presentations“Our department was approached by the Safety Committee in San Pedro and invited to come down to the island to speak with the parents and youths,” said Fermin Olivera, Director of the Community Rehabilitation Department in the Ministry of Human Development. “They are concerned about the delinquency and crime in San Pedro, and although many intervention programs have been started, there is still an apparent need for more. The Town Council has promised to help with the hiring of a Community Rehabilitation Officer and our department will assist with the training of the officer. This is one big step that’s being accomplished at this time.”

Human Development Coordinator, Maureen Williams, told Ambergris Today that their goal was to get the community’s input by meeting with both the parents and youths. “It is our first meeting with parents in San Pedro,” said Williams. “Our first meeting with the parents in Belize City made them realize that their problems are not isolated cases and that many families have problems. We are here to listen to their concerns and get their input on how to find solutions for this particular community.”

Youth ProgramSince San Pedro is much different than other areas in Belize, mostly because of its tourism-related affluence, Williams said that it was very important for their Department to get to understand the peculiarities of the community, hence the need to hear these from the parents and youths who live on the island. “We need to get info in regards to the untapped resources or undiscovered needs that are here on this island,” added Williams.

During the meeting on Friday, the teens, mostly from San Pedro High, got to talk frankly about the curfew, juvenile crime, and recreational facilities needed on the island.

Students’ comments and suggestions developed in these sessions included problems they saw facing families in San Pedro such as prostitution, drinking, alcoholic parents, and lack of parental supervision. Asked about the two leading challenges facing young people on the island and teens mentioned problems such as teen pregnancy and sex, gang activities, peer pressure and family problems. As for a curfew, the students said that it would only work if there are supervisors and if the Police enforced it properly. They also suggested that a reasonable time for the curfew would be weekdays- 9 or 10 pm / weekends-10 pm for Primary School students and weekdays-10 pm / Weekends- Midnight for High School students. First offenders should be given community service, followed by fines to parents and counseling.

During the forum, the youths were also shown an educational video titled “Do you see what I see” and treated to a delicious BBQ lunch. One positive note coming out of the meeting was the promise by Reverend Jenkins to build a skating rink on the island for the teens.

The Youth Forum is a non-political program which is being conducted by UNICEF, Belize’s Ministry of Human Development, the Community Rehabilitation Department, and the Ambergris Caye Safety Committee.

Photo Caption:
1 & 2. San Pedro High School students put their thoughts down on paper
and present them to the gathering.
3. Fermin Olivera and Maureen Williams conduct forum at the Lions Den. 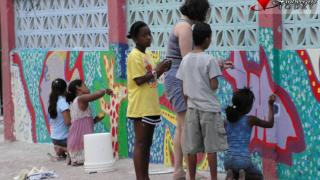 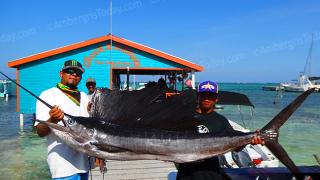 Catch of the Day in San Pedro!