Lloyd Andrew Usher, 48 year-old, Belizean Tour Guide and Boat Captain residing at Caye Casa unit #4, Boca Del Rio Area reported to Police that on Tuesday, January 6, at about 3:30a.m. he was alerted by his neighbor Robbie Guerrero that his boat engine 40h/p brand name Yamaha blue and red in color valued at $6,500.00Bz was missing from his boat and saw a white skiff leaving the area with (3) male persons on board. Mr. Usher along with Mr. Guerrero then left on boat behind the white skiff and managed to apprehend one of the male persons and the two other managed to escape by docking their skiff and running to the nearby bushes. The 40h/p engine Yamaha Brand was recovered and as a result Police arrested and charged one Marvin Giovanni Velázquez Lonis, 24 year-old, Honduran of no fixed address was arrested and charged for the crime of Theft. 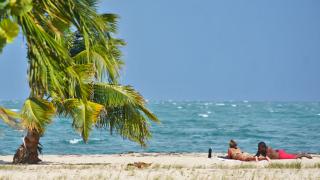