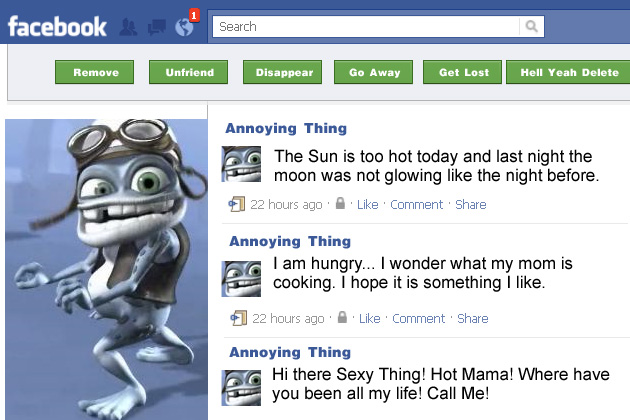 We got on Face book to connect with your real life, hear about your triumphs, how great you are doing in school, news about your family, not about your "life" as some kind of monster who keeps posting how hungry you are or if you just tripped over a rock.

Facebook is the most popular social networking site on the web, with over 500 million users. With all of those users, it's easy for friends to reconnect and stay up to date, to plan reunions and even search for employment. But with the good comes the bad and all those applications that ruin things. That's when it's important to know how to use the block feature or, when someone has gotten on your last virtual nerve, how to "unfriend" them.

Ditching your online so-called “friends” on Facebook should not be hard if all they do is post nonsense or as they say in Belize “They just too Betsy” (Too much snooping in your private stuff). Even the New Oxford American Dictionary officially named unfriend the “It” word of 2009. So what are your reasons to “Unfriend” that annoying “Friend” on Facebook?

Kristin-Being entranced more and more by Facebook each day, one learns the intricacies and workings of this social network. Its intention of bringing friends together and expanding your network for the benefit of all parties involved has actually had adverse effects. What actually is happening is people are adding you simply for the intention of sabotaging your name. They twist your words, talk bad behind your back, and make a complete mockery of you without you knowing. That would be a number one reason for deleting someone. Next, after adding someone apparently decent, they turn out to be a completely disgusting creep- number two reason for deleting someone. When someone obviously is spiting you on their status and takes away the happiness of facebooking, that person deserves to be deleted. And lastly, if you keep getting in trouble because someone goes to your parents for everything, unfriend him.

Guadalupe -Ff that person is a freak and tries weird things that are not right for example like in a sexual manner or simply insulting me.

Gabriela- I would un friend a person on Facebook if they stock me and click on me on Facebook chat too much and send me private messages and also if I don’t have any mutual friends with my contacts.

Giselle- Probably because I got into a fight with them or simply because I don’t really knows them and stuff, especially if you hear they said something about you and concerning Facebook.

Sofia- I would unfriend someone if they told me something mean and I don’t know them, or I know them but they wanted to start drama with me.

Stefan- When I unfriend someone on Facebook it is usually because I have gotten in verbal altercation with the person, or the just causes problems online for me and my friends.

Lucio- Well honestly I would unfriend anyone who is a pervert and is always harassing others and me.

Kendra- At times people just add you to know about your business and interfere in your life, and sometimes they can be really annoying, so hell yeah DELETE.

Mimo- Well maybe because I don’t like the person, or the person is trying to come between a relationship that I have with a friend or  boyfriend, and maybe the person is just annoying LOL.

Alexandra- Well if they would start a fight and just start telling me crap, I would certainly immediately “unfriend” that contact.

As we can see we all experience at some point this situation, but with one click you are stress free. 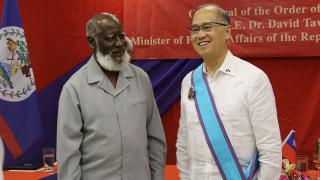 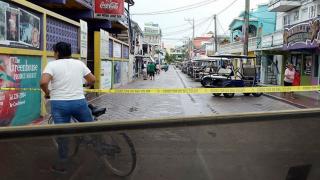 Police to Boost Presence on Ambergris Caye After Recent Murders