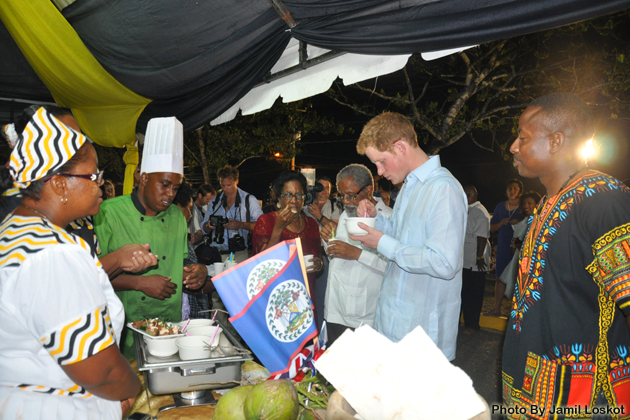 Belize knows how to throw a party and definitely goes “all the way” to make guests feel special, royalty or not! :) I can definitely tell you that Prince Harry made it out of Belize a couple pounds heavier because at the Diamon Jubilee Block Party held on the day of his arrival to the country, he indulged in some fantastic food prepared by some of the best Chefs in the country.

When you travel to distant places, food is a major part of your trip. Getting to know the place also involves trying out the local cuisine and sampling some refreshing drinks. Belize is known to serve up a mean collection of food that transcends a large group of cultures which make our country such a diverse one. Food in Belize is influenced by cultures from the Maya, Garifuna, Meztizo and Creole and Prince Harry had the pleasure of indulging in so much of this ridiculously delicious food that he is probably still digesting it.

Here are some of the tasty dishes HRH Prince Harry had to sample while in Belize:
*Mestizo: They are the descendants of the Maya and Spanish settlers who immigrated to Belize during the Caste Wars of the Yucatan and they live predominantly in the northern and western part of the county. Soups such as Relleno, Chirmole and Escabeche contribute to Belize’s culinary identity. Due to their background, their food is a mixture of Spanish, Mexican and Maya. 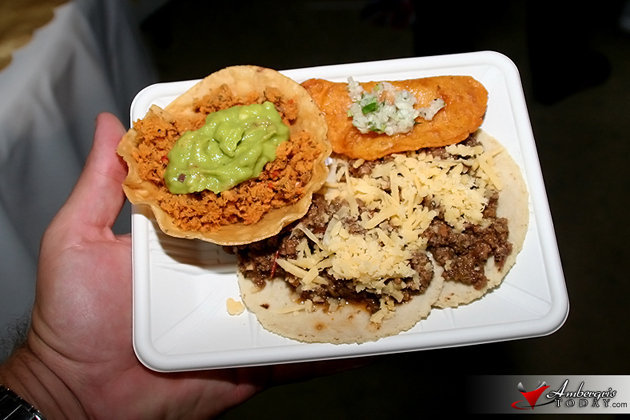 Conch Ceviche – pronounced conk ce-vee-che
The dish is made from fresh raw conch marinated in citrus juices such as lemon or lime and spiced with chilli peppers. Additional seasonings such as onions, salt, coriander/cilantro and pepper may also be added.

Chicken Tamalitos - pronounced ta-ma-lee-toes
Stone-ground maize is mixed with lard. This mixture is then filled with chicken and wrapped in banana leaves. The tamalitos are then tied and steamed in a pot.

*Garifuna: They are descendants of the Carib, Arawak and West African people. This rich culture includes the drumming of the Punta music and healing traditions. Their language, music and dance are a great influence in the country. The Garifuna food style comprises mainly of fish, cassava and plantains prepared in a variety of ways. 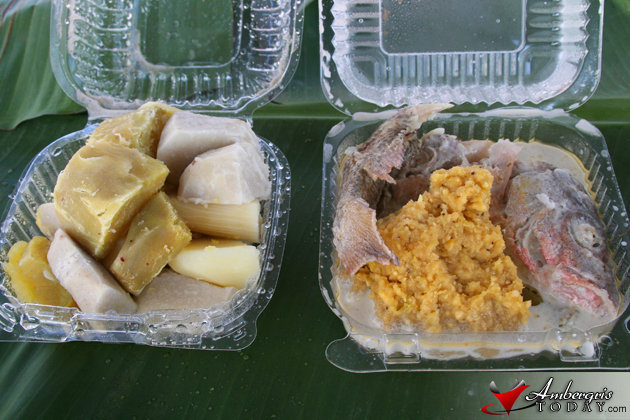 The Garifuna offered Prince Harry Sahul, a sweet drink made using grated cassava (a ground food), condensed milk, cinnamon and nutmeg; Hudut which is a dish made from a mixture of green and ripe plantains and cassava served with fish hash; Banana Frindas which are green bananas mixed with onions and pepper, made into a ball and fried, served with habanero sauce.  Cassava is also the main ingredient of the dessert Cassava Pudding which is locally known as Plastic Cake which includes coconut milk, cloves and vanilla.

*Creole: The Creole are descendants of English and Scottish (the Baymen) log cutters, as well as Black African slaves brought to Belize. Among the main staples of the Creole dinner are rice and beans with some type of meat for example  stewed chicken, pork or beef and baked chicken. Their seafood includes fish, conch and lobster and game meats include iguana, deer, peccary and gibnut; and ground foods such as cassava, potatoes, cocoa and plantains. 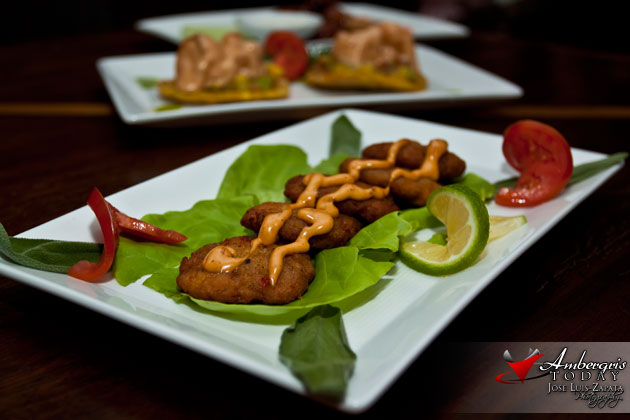 Prince Harry indulged in Conch Fritters which is minced conch, onions, peppers mixed with four and other ingredients into a dough and deep fried; Duck Satay with Cashew Sauce - Creoles are known for loving game meat. Duck is more commonly eaten in the rural Creole communities. There was also Grilled Lamb in Belikin Beer and Espresso BBQ Sauce – The lamb was grilled and accompanied by a dipping sauce made from our very own Belikin Beer and locally produced coffee. And who can forget the famous Cow Foot Soup  - Often times, slaves and farm hands were given the parts of the meat that was un-used by the wealthy owners. This led to the Creoles to create inventive foods such as Cow Foot soup, which as the name implies, is soup made from cow’s feet. It also includes tripe, coco and yams. 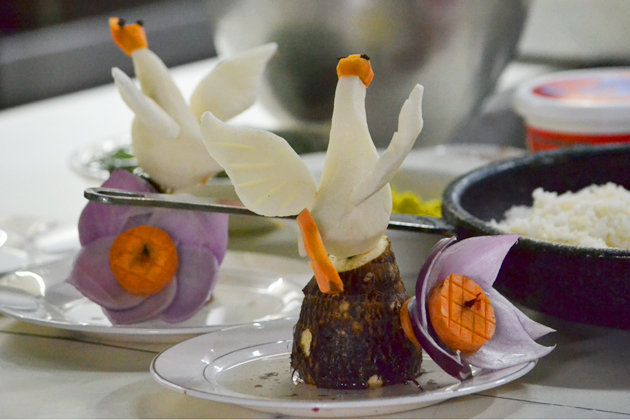 Prince Harry was served up a royal cuisine at Chaa Creek

Let’s not forget about the Maya menu that was served to Prince Harry after he climbed the Maya temples at Xunantunich. The Maya menu included Cayo Bollos, a corn mixture cooked in plantain leaves and Pibil, a pulled pork dish made by cooking a whole pig, that has been wrapped in plantain leaves, underground for several hours. The pibil will be served with handmade corn straight from the hot comal. Prince Harry will also get to try Holchuch, a refreshing dish made using slices of hicama and sweet oranges. For dessert, there’s candied papaya.

I did have the pleasure of sampling most of this delicious food that was served to Prince Harry and while indulging in the many restaurant reviews here on the island of Ambergris Caye, I have had a fantastic experience filling up, to my belly’s delight.

Ambergris Today’s best experience with Maya food has been at Elvi’s Kitchen Maya Buffet. I highly recommend trying that out when you are in San Pedro, Ambergris Caye.

One Belizean platter that definitely transcends all cultures in our beautiful country of ours has to be the Rice and Beans. I read somewhere that to truly sound like a local, you would have to say it on one word: “riceandbeanschickenandsalad”. The iconic Belizean dish - coconut white rice and red kidney beans served with stewed chicken and chunky potato salad and fried ripe plantains. 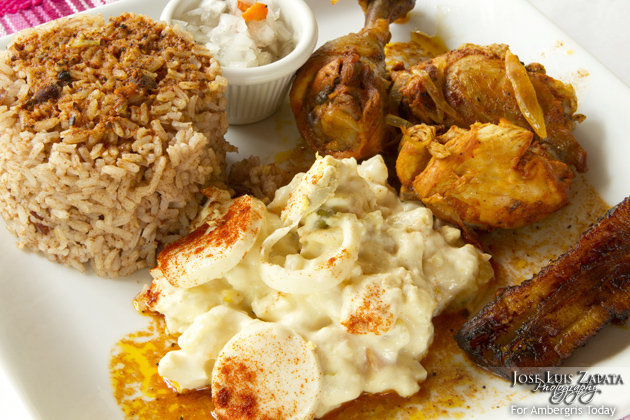 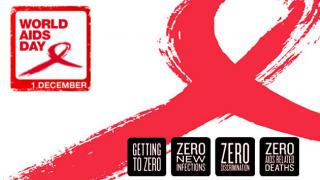 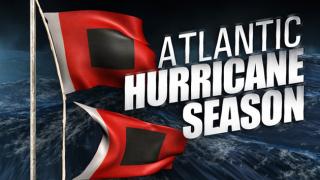 Hurricane Season has Begun, Below Normal Activity Predicted for 2014 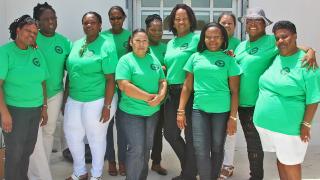