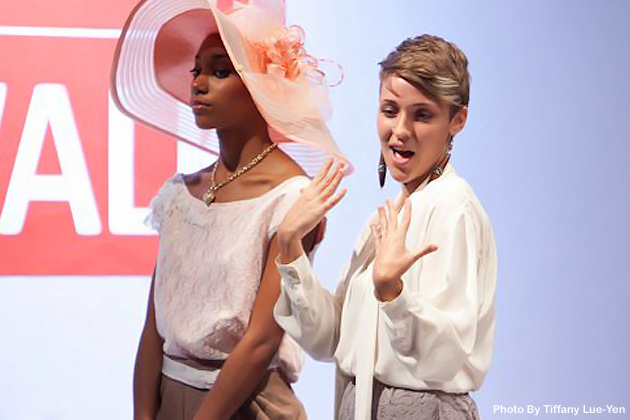 “When I saw the hats I immediately knew which one I wanted to work with. The ladylike peach hat had caught my eye. In my original sketch for the piece, I had planned on doing a soft summer dress. After looking around a bit though, and realizing that everyone else was doing dresses, I chose to do a blouse and pants.”

Her move won her points from judge Novia McDonald-Whyte Lifestyle editor at Jamaica Observer who commented that the pant’s pleating and subtle ankle details were “genius.”

Rebecca, who found material for her episode 2 design in the curtain section of Pablos’s, again went outside the box and sourced fabric for her pants in the upholstery department: “a stronger material with a lot of body and shape.”

Her peach-colored, satin blouse had a feminine appeal with an overlay of white lace to tone down the color.  She also made the white tailored belt and added a gold jewelry and a yellow purse to complete the ensemble.

Milliner Marcellas James (the owner of Cinderella Hats) found the “exquisitely detailed” design, “unusual and unexpected.  International menswear designer Carlton Brown thought the accessories “too much” but was pleased with the overall look which he described as “amazing.”

“Stylish, on trend and creative” were the words host and executive producer Keneea Linton-George used to describe Rebecca’s interpretation.

The safe designs came from Janel Jolly and Keshon Hawthorne of Jamaica, Janelle Forde who represents both Barbados and Trinidad, Barbadians Kerin Scott and Kesia Estwick, and Ryan Berkeley of Guyana

This week’s top runners up from best to worst were Crystal Powell of Jamaica (last week’s winner) Gregory Williams of Jamaica and Ryan Chan of Trinidad.

Shellane who had missed being sent home in episode 2 where she landed in the bottom two, did not find luck this week as she was swiftly sent home by the judges.

Twelve more designers remain. Catch up with them on episode five where dancehall diva Lady Saw will judge their creations. Who will win JA$3 million worth of prizes including the chance to show at London Fashion Week 2012. Who will rule the catwalk?

Tune in to Television Jamaica every Tuesday at 8:30 PM for the newest episode from Mission Catwalk Season 2, presented by NCB, Supreme Ventures and Digicel. For those in Trinidad the series airs Tuesdays at 9:30 PM on TV6. Mission Catwalk streams online at or check out Mission Catwalks You tube Page. 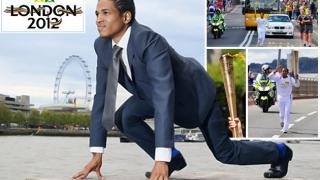 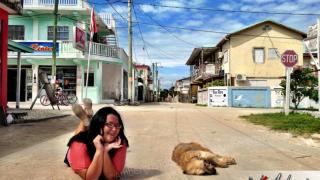 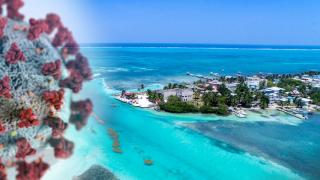