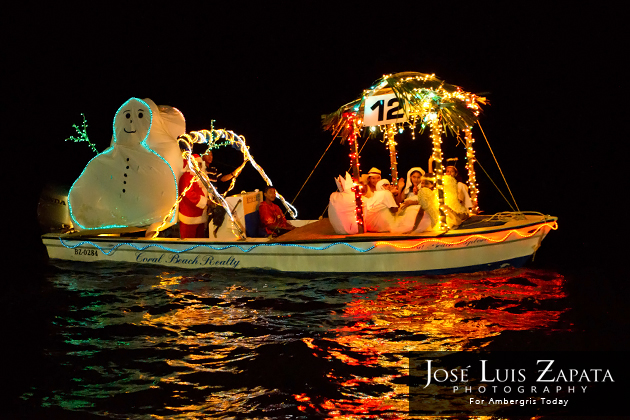 It was the San Pedro AIDS Commission that captured the eye of the judges during the sixth annual San Pedro Holiday Lighted Boat Parade that took place on Saturday, December 3, 2011. Their decorated boat and high spirited staff was awarded the top prize of $1,500 during the holiday season celebration as 12 other boats decorated the night with vivid lights and cheerful spirits.

Ambergris Today once again had the pleasure of being along with the judges and sharing with them a close up look at the parade. The judges were hosted by Lady Dixie Bowen who allowed the parade committee to use her pier for viewing and judging. The judges were caught in the rain a couple of times, but that did not stop the fun.

The boats took off from in front of Wayo’s Beernet and Grill and traveled along the coast down to Caribbean Villas; along the way hundreds of residents took up spot with friends and family at various viewing stations to enjoy the parade. Isla Bonita Elementary filled the air with drumming with its marching band, the Island Academy students sang Christmas carol, Santa was ‘shuffling’ in the SP Lions boat, Holy Cross Anglican School had a live nativity scene and of the other boats had entertainment of their own. It was a very lively, colorful and enjoyable parade this year.

Central Park was teeming with action as residents enjoyed the boats sailing by and visited the various food, drink and sales booths that were set up for the evening. There was even a children’s choir competition that was won by the Island Academy followed by Holy Cross Anglican School and Isla Bonita Elementary.

Isla Bonita Elementary School and Heavenly Cupcakes were awarded a tie with the best booths.

Thank you Letter from Boat Parade Committee: A very special thank you to the 2011 Sponsors.  We appreciate your financial and in kind support in making this year a huge success.

We hope you visited the following booths at the Block Party and enjoyed food, drinks, kids activities and phone services!

No one is ever intentionally left out of our thank you.  However, if we did, you are special and we appreciate your help.  HAPPY HOLIDAYS!   SEE YOU IN 2012! 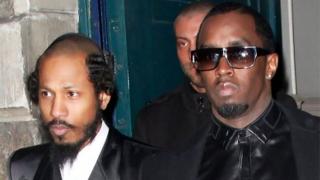 Diddy Congratulates Shyne Barrow as He Runs for Politics