Sgt. Dominguez and P.C. Lyons of the San Pedro Police Department gave a few remarks on the new substation and both were also grateful for the handing of a new North Police Patrol Truck that was made possible by Special Constable and Justice of the Peace Police Chris Berlin, through his work and the generous donation by north island resident Don Listwin.

Scott Harnish, President of NACNW, spoke of some of the achievements of the NACNW, such as the completion of the North Ambergris Phone Tree (for immediate access to neighbors in need of help or to report a crime), completion of simplified and uniform police report to be used by all residents (help to easily document information to allow accurate, timely and complete follow through for everyone on the island) and the dedicated phone for NACNW - donated through SMART to be used for communication with NACNW Members directly to the Police officer assigned to the area.

One of the main goals for the NACNW is the reduction of crime in the island but to achieve this they believe that they first have to man the substation with qualified security guards and police, establish a common radio communication with all Security for North Ambergris, establish a Response Team and carry a manifest for commercial passenger carrying boat traffic to name a few.

After all the formalities the children had an educational fun afternoon, they learned about helping to stop and report crimes as well as the importance of not littering and keeping the island a safe and clean environment to live in. They painted signs on coconut husks (also learned to stay green with the environment) and the signs will be posted along the Beach and road and the children can all see them and be proud of their work.

All in all it was a very successful day for the North Ambergris Caye Neighborhood Watch. “We would like to thank all the individuals resorts, business and families that donated their personal time, tools, materials and labor to make this goal become a reality,” commented Scott Harnish. Kudos to the NACNW and everybody who helped out! 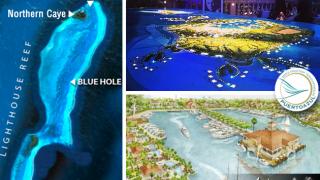