Hurricane Shelters of the Past

There are many questions to ask in this topic and here they are. Are thatch roofs stronger than zinc roofs? Are wooden houses stronger than concrete houses? If all houses are made of thatch and palmetto sticks, then which were the hurricane shelters if all were alike?

The truth is that there are no experts to answer all of these questions. Someone will quickly say that not one of them is stronger, and that both are vulnerable to the power of the treacherous winds of a hurricane. The older folks believe that the zinc or galvanized roofing will all fly away once one small section starts to lift. Therefore it is important not to leave large open areas where the wind will pry from underneath and lift the first sheet of zinc. The old timers also are of the opinion that the thatch roof will not lift. It can only yield or give in if it is hit by a heavy object from the top, say a falling tree or some post.

But let us go to the question, “Which were the hurricane shelters of the past?” For the most part, people tried to go to some fairly new thatch house alone the back street, which is now Pescador Drive. No high tide or strong sea has ever reached that street, so once you were pretty sure that the roof could take the strong breeze, you considered yourself safe. Ropes and fishing nets would be crisscrossed over the thatch roofing to prevent it from lifting, and if this survived, the little thatch house would survive.

People thought, and with good reason, that the lower the house, the less wind it would trap. And all thatch houses were flat on the ground. In fact, most of them had dirt floors. Only one or two wealthy Sanpedranos had a slightly elevated wooden floor inside the thatch house. The San Pedranos also reasoned that a thatch house would lean to one side, but not fall. If the wind came from a different direction, then the house would be straightened once more.

For Hurricane Janet in 1956, our family started weathering out the storm at our grandfather’s house, which was a thatch roofed house on the back street more or less at the site of el Patio Tortilla factory today. The roof held well for about two hours and started blowing off. My dad went to don Cristino Gomez just about a block away where Betito Marin lives and found his house to be doing well, so our family was moved there in the middle of the storm. About three in the morning, that thatch roof also started to give in. Therefore the next move was to the Blake House on Barrier Reef Drive, now the Alliance Bank Building. That was a wooden house and the third floor was covered with zinc roofing. Well, we got wet all night, but thank God that roof did not blow off, so we were safe. Our first shelter lost about one half of its thatch roof, but the house itself stood the storm.

Again to try to answer which house is stronger is very unpredictable because in the middle of hurricanes, there are tornadoes. They can hit a very strong building and knock it down and leave untouched a fairly smaller and weaker building right beside it. During Hurricane Keith recently we had a good example. There were several strong roofs blown off, while some thatch roofs were only slightly damaged. Hurricanes are unpredictable for sure, and when you are running from the beach area to the leeward side of the island, then the hurricane can come from behind in the West and hit you right there. Therefore there is no stronger no weaker house. Go where you consider is the best and pray a lot. Please do pray a lot because hurricanes are unpredictable, but God is predictable and you know you can count on Him. 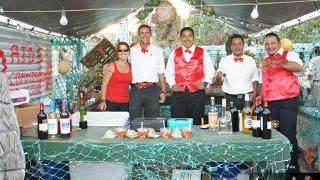 Thank You Letter from the San Pedro AIDS Commission 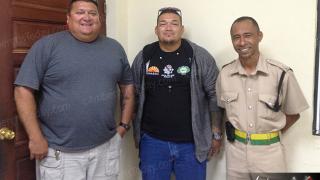 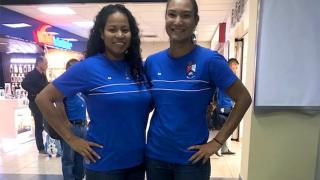